Hope all well at home. I hear there has been a lot of wedding planning and much progress made in my absence. Your mistress is doing an amazing job in my absence and probably better off without me!

Last wrote when in St Jean d’Angely since when there has been more drama of which much more in a minute. I got lost going out of St J.. lost my sense of direction and found myself going north and so had to retrace my steps back through the centre no doubt much to the puzzlement of the early morning crowd. After that and recovering my rhythm (very important for covering distance) I had a lovely mornings walk meeting up with Maxus a carpenter ( formerly sound engineer) from Paris. He travels fast! We came across the annual soap cart racing track, downhill and then towed back to the top. Lots of fun being had. Lunch at a picnic site where Maxus proceeded to cook himself lentils and boiled eggs etc and I left him after consuming my usual ham sandwich, tomato and an orange for desert ( Best moment of the day)

I had reserved a ‘chambred’hote’ ( a French B&B) and my hostess, whom for reasons which become apparent, I will just call V came and collected me as they lived a short distance off the route. We arrived at a very nice house in a lovely garden. My quarters were in an adjacent building and very comfortable. I had tea in the garden with both V and her husband.  He had just won through to the finals of the local tennis competition and was clearly a serious player having been to Rafa’s tennis school. He was very proud of his garden but a little troubled by ‘Les taupes’. But the only instrument with which he had to tackle them appeared to be a trowel and apparently no traps. I was in the process of referring him to Chris Boone but as things turned I never did.

After the usual routine of washing both clothes and self,  and then down loading some music and a book, I made ready for dinner which I was told would be with them. The bar b q was light in the pool house and then I was told he would not be joining us as he was feeling unwell.. too much sun and tennis. After a ‘pineau’ ( cognac aperitif.. very good specialty of the area) or two, we ( V and I ) finished our starter and the main course being burnt sausages and duck.. clearly her mind was on other things… was served. She went to check on husband and returned to say he was not at all well and ( as I understood it as she spoke very fast French) she was calling the doctor and possibly an ambulance. As I sat there wondering whether I should be attending the bedside, trying to recall how you identify a stroke, eating the dinner or frankly not being there at all, she eventually returned. Again it was hard for me to follow but the general gist was that she had concluded he was fine and just making an unnecessary fuss. But then it went further and again as I understood the drift of it she was saying how fed up with him she was, too much work,  not enough attention, no holidays, too many moves. She was obviously not very happy. Hard to know how to handle it all (a) when not sure precisely what said and (b) certainly incapable of giving advice in French! So after dinner, thinking was no more than just a bad night, I made polite excuses, said I am sure it will be better in the morning and off to bed.

Well how wrong I was! By the time I went down for breakfast he had left apparently to prepare for the final. V then kindly undertook to show me the main sights of Saintes, a really lovely small city and well worth a visit. Eventually and rather late for my liking I headed off to Pons about 29 ks off. A pretty uneventful day although long and hot and eventually arrived at my new b&b which V had kindly introduced me to run by Ingrid a friend of hers who had been an opera singer. I was greeted by Oliver the husband who showed to a very comfortable room, produced a cup of tea and an ice pack for the ankle.

Once again having run through the usual routine, I prepared for the dinner. I came down and had a look round Ingrid’s lovely garden and then who should appear but V! This time things had clearly got worse. There was much reference to husband having a ‘coeur noir. At first I thought this might have been a medical term and appeared duly concerned about his health until she then showed me a text from him saying he was not coming home tonight and spending with night with ‘une amie’. Again I was ‘lost for words’ in more ways than one! There was reference to avocats and having to go back to work. Really truly tragic story but she was at the angry stage and so no consolation needed. Any way Ingrid appeared to be handling the situation and giving her sound advice.

One wonderful interlude to the evening was Ingrid’s singing and her three dogs really joining in as the chorus. One for Britais’s Got talent definitely.

An interesting evening. Breakfast the following morning V was still there. More conversation over breakfast but distracted when Ingrid asked me if I voted Brexit. ‘No’ I said proudly.. wrong answer as she is a leading Frexiteer!

This time I made good my escape earlier to head for Mirambeau. Moving into big vineyard country now but where there was grain I noticed it was beginning to ripen.

During the day I had taken the precaution of booking in to a monastery / presbytery overnight as an antidote to my previous two! Pere Jean a priest just over from The Congo was my host and cooked me dinner and produced a delicious bottle of wine. Charming man with a brother in the US and six sisters still in the Congo. He said he had heard of a recent outbreak of Ebola there but still confined to a region. Otherwise all was relatively calm there.

Tonight I am in gite near Blaye with a lovely couple who cooked me dinner. Unfortunately I think we have a snorer. Need to find my ear plugs. Tomorrow is a long day..35 ks to just outside Bordeaux. This time in a nunnery!  Will be  crossing the Gironde in a ferry and walking  through an expensive wine list!

Humphrey, every garden and farm I pass by there is always a dog to ‘greet’ me. I am never quite sure whether they are friend or foe. Nor, I suspect, are they of me! Almost always they are the other side of a fence but not so on one occasion yesterday when I had this dachshund snapping at my heels!

Enough for now. Be a good boy and look after mum and Cocoa, who I hear was put most of the night last weekend and they needed you to find him.

your friend and master 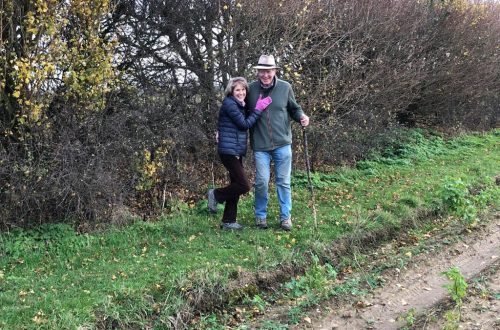 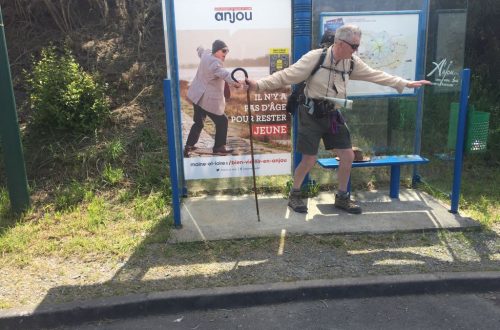 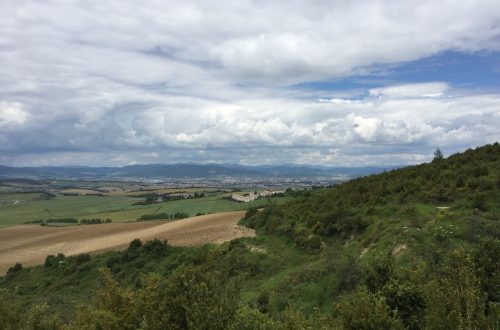